Humans are social animals by nature. If we feel lost, we fall into the arms of our trusted ones. We seek for sympathy and understanding of our beloved ones, and we experience a healing sensation from being held at hard times. But what happens if the trusted person is the cause of our suffering? FUTURE PALACE explore this question on their debut album with full fury. »Escape« is an extensive catharsis and a healing getaway from toxic relationships. Turning a big cleansing process into metaphorically laden music the Berlin trio is deeply rooted in the post-hardcore genre while being influenced by different styles of electronica, soul, and 80s-synth-pop all united.

Having met in the end of 2018 FUTURE PALACE have not been a band for too long.

Therefore it is even more impressive how focused the Berlin band was working towards the release of their first album. »Escape« was produced in cooperation with Christoph Wieczorek, who already worked with well-known acts such as ANNISOKAY and EMIL BULLS. FUTURE PALACE finalised their songs at his studio in Halle, Germany in about six months. The attention to detail in their songs led to a complex mix of genres on their album. But this mindfulness during the working process went beyond the musical component for FUTURE PALACE are more than just a band with well elaborated music. "My goal with this band – fitting to its name – is creating a better future" explains singer Maria about the direction of the project. "We want to develop strength facing difficult experiences and become a motivation for other people."

Maria’s way of thinking did not appear out of the blue. Since »Escape« contains her interpersonal experiences which had a big effect on her life. "I've been struggling for a long time putting the intense experience of a sick and violent relationship into words. Also my childhood was shaped by a broken relationship between my mother and my former stepfather", tells the singer while she is revealing what kind of emotional burden is carried by »Escape«. "Music and song writing are my sanctuary", says guitarist Manuel. "A world in which I can escape from everything and express myself in ways I could never put into words. Every song gives an insight into this private world and reveals more than a thousand sentences ever could. These tracks connect past, present and future in a stylistic and emotional way."

All this is expressed by ‘Illusionist’, the fierce first single of the record.

With raging vocals Maria is singing about her heavy past surrounded by the storm of a massive melodic instrumental. "I'll never be one of you, I feel so misplaced I just need my own space. I've seen way too much of your hate and disgrace that I've lost all my faith" it says. FUTURE PALACE point towards the striking split between absolute despair and rising hope at times of inner conflict and emotional chaos in their song. ALAZKA Frontman Tobias Rische joins the song with an unmistakable brutality in his voice, lifting the track to another level of heaviness.

With this track FUTURE PALACE already clarify a lot what will be essential during the entire length of »Escape«: their music reflects life`s confusions and turns through sound and words.

This pattern also lies at the heart of the song ‘Lately’ which introduces a constant musical transformation. Starting with a noisy synthesizer beat the track builds up to a powerful alternative chorus. In between the band reduces the weight of the song to create space for intimate moments. This leads to a moment before the end in which Maria is just accompanied by a few delicate piano chords whilst opening up her soul with her voice right before the song kicks in with full force. "Seeing my body completely bruised makes me hate myself the most" she sings repeatedly with a bitter expression in the song's pre chorus – a moment of impressive openness; but also a reflection of ambivalent profound conflicts.

The process of dealing with psychological consequences stemming from destructive experiences is a reoccurring topic on »Escape«. Yet Maria does not only focus on herself with her lyrics but also on her tormentors. "In all these situations the presence of mental illness and depression played a relevant role – because no happy person would ever hurt another so badly" she says. "It is very important for me to show that you can overcome shocking and destructive experiences -  and gain strength from them."

As the songs on »Escape« clearly show finding a way to develop new strength wasn't easy. Like Maria describes her thoughts that guided the creation of their debut album: "This type of strength does not develop overnight; and the past will always be a part of you". "The song ‘Maybe’ tells my personal story of the constant fight with depression and suicidal thoughts which are partly consequences of my past. It is important for me to share the knowledge that you can fight and overcome these thoughts; that I won't give up and that I truly hold on to my fighting spirit." In fact this type of striving emotion is expressed in ‘Maybe’ but also the fear of a potential loss during a fight against these feelings: "I'm scared I can't reach what he expects. I don't wanna regret obeying to him and ending up dead. 'Cause I don't really wish to give up yet."

»Escape« being such a thrilling experience is the logical consequence of the work of a band that travelled through the deepest emotional valleys and openly deals with these hidden areas of their mind and past for the sake of art. Simultaneously strength emerges from their explorations. FUTURE PALACE's debut album is an impressive demonstration of the cathartic force of music; and the proof that music can be the saving anchor that we might not be able find in our trusted ones.

The music and emotions on »Escape« being as diverse and differentiated is owed to the clear vision of a well harmonizing trio which at this early stage of their career already knows very well how to combine their strength in the most efficient way. Or as the drummer Johannes puts it: "Unconditionally working for a higher goal was never this exciting, challenging, and also fulfilling to me." 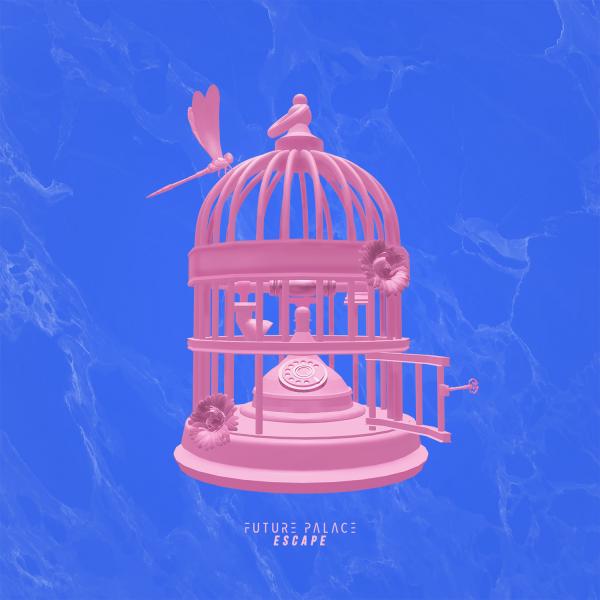