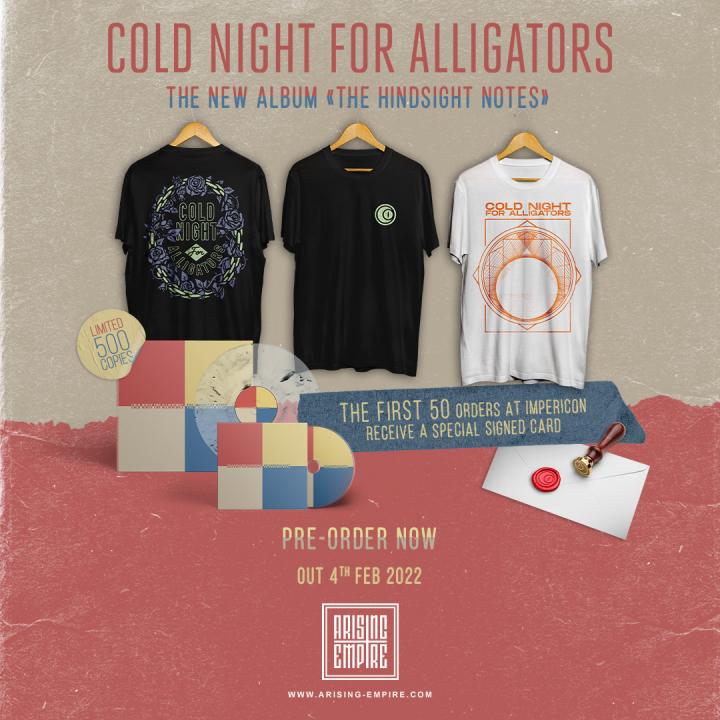 Forward-thinking prog-metallers COLD NIGHT FOR ALLIGATORS have announced their third full length album called »The Hindsight Notes«, due for release on February 4th via Arising Empire and
just released a new single entitled ‘Verism’. A masterclass in tight riffing and majestic vocals, ‘Verism’ is another window into the unblemished world of CNFA.

Hailing from Copenhagen, Denmark, and having previously released two technical prog-metal albums, there has now been a shift in focus to a more uninhibited, and more mature vision within the band, as is proven in the live video which accompanies the latest single.

The band on the track and video:
“We come from a scene where everything is produced and edited very tightly and doesn’t leave much of a human touch. Everything sounds perfect and we wanted to do something that goes a little bit against this. So for the video, we decided to do a live session with a talented pianist and some cool back-up singers we used on the upcoming record. The song itself is very straightforward, tight and meticulous, so it was really fun to open up the arrangement a bit - it feels like a different beast and a cool contrast to the studio version.”

Vocalist Johan Pederson also had a slightly different approach to lyrics this time around.

Vocalist Johan Pedersen on the lyrics:
“This is one of the more meta lyrics I’ve done, where I reflect on the effect of writing about stuff that can feel a bit voyeuristic.
Art needs to exhibit the real and thereby also the extreme, ugly and vulgar. But it can have a harsh psychological effect, as you step into that space mentally. If it’s not my own story I have to get as close as I can emotionally.”

The band on the new album:
“This record is the sound of us growing up as people and musicians. Before and during the pandemic, the creative process was a fixed point in a lot of personal chaos, which we tried to channel towards an honest and personal statement. Everything was allowed, but also had to be executed to perfection. We brought in a ton of cool collaborators to make this vision come through and truly feel like we made a fully formed record that does not follow trends and does not compromise. Whether it was going softer, more straight forward or more experimental, we made a point to follow where our common creative sensibilities led us. It was a huge amount of work, but the album feels intensely rewarding and personal for that reason.”