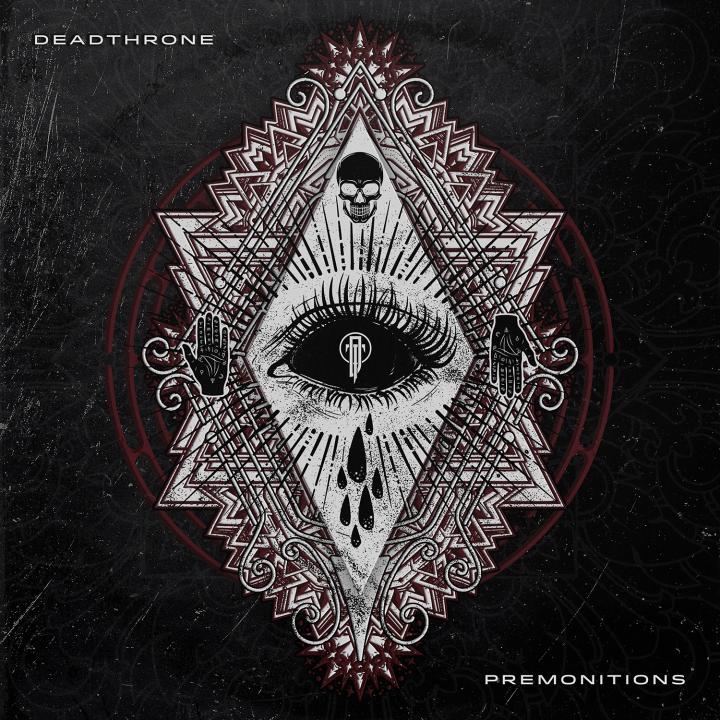 DEADTHRONE states:
“We are pleased to announce our debut album ‘Premonitions’ is now available to stream and purchase worldwide!
This album has been in its workings longer than the band itself. When we started out we were kids with no real idea of what we were doing, just making noises in a rehearsal studio and dreaming that one day we might get to this point.

Since those first fumbling steps we've grown and matured, both as people and musicians, and been through some dark times together. We've loved, and lost. Some of us have been through hell, gone right to the brink of what a person can cope with, and somehow come back through it.

Through it all, though, there have been moments of brightness and hope, things that drove us to keep striving individually and as a group. We've toured the UK and Europe, making friends across the continent that we'll treasure for the rest of our lives.

We put our lives on hold to chase this dream, and it's all been building to this point. These songs are a chronicle of everything we've been through, every dark moment of fear and doubt that told us we should quit, and every ray of hope and joy that drove us to keep going, that it would all be worth it. And now it's here.

This record means a lot to us, and we hope that when you listen to it - for the first time or the hundredth - that it means something to you, too.

Thank you for your continued support.

-Chris, Benj, James & Sam
We would also like to give thanks to Arising Empire, Mike Bennett, Foxhound Recordings Studios, Zain Zia, Simon Atkinson, Jake Kindred & Matty Daleyy for making our vision a reality.”

Press quotes:
"This full-length builds on that early promise, a breath of fresh air in a genre that often feels oversaturated and stale. Fuelled by the sense of hopelessness wrought from growing up in a post-industrial city with few prospects, Chris Bissette’s lyrics serve as a grave reminder to just how bleak the future can feel. However, the delivery and execution are inspiring, with welltimed breakdowns and choruses full of melody that make the entire record strangely uplifting. The synths and samples used throughout are a somewhat unwelcome distraction from what are otherwise beautiful instrumentals, although they’re only ever a big riff away from being fully immersed back into an atmosphere that, at its best, is wonderfully poignant.” – Angela Davey, KERRANG (UK)

“With brilliant performances from everyone involved and a sound that grabs listeners with ease, I certainly recommend this album for anyone who’s a fan of Hardcore and Metalcore without hesitation.” – Rock’N’Load Mag (UK)

"The Melodic Metalcore quartet comprising Chris Bissette with the unclean vocals, James Bolton with guitars and clean vocals, Sam Clough on second guitar and Benj Speight on drums are getting ready to unleash the dragon with their debut full length album “Premonitions” via Arising Empire. It’s been 3 years since they started out with “This Isn’t Over Yet” and it looks like their hard work has paid off!” – Metal Noise (UK)

“Over the past couple of years, Manchester’s Deadthrone have carved out a cult following with their electronic-leaning style of metalcore. Throwing in breakdowns aplenty, complemented by bold synth work and soaring melodic vocals, the band have a winning formula on their hands. With an EP under their belts and new music on the horizon, the future looks bright for these ambitious upstarts.” – ROCK SOUND

“I am an ardent Metalhead and all I want to do is run out into the street and scream my head off in support of Premonitions. DEADTHRONE stand up with their contemporaries; they have hijacked the electronic dance movement and like Bring Me the Horizon, they are ready to stamp all over what has gone before. With Premonitions, DEADTHRONE are readying themselves to release something special.” – All About The Rock