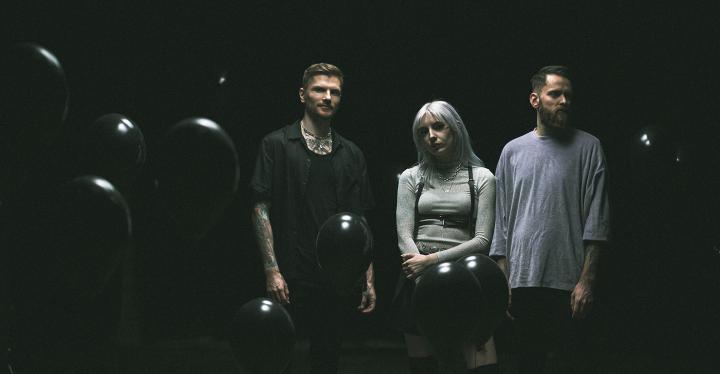 Defeating Gravity
Knowing when something is no longer possible: For many years, the number of people suffering from burnout or depression has been steadily increasing in Germany. The speed of life seems to be getting faster and faster. For some, this makes them all the more reluctant to show weakness. It therefore seems more appropriate than ever that the Berlin post-hardcore trio Future Palace wrote a song about accepting one's own weaknesses in the face of this zeitgeist.

'Defeating Gravity' is a sonic monument between emo and post-hardcore, melody and brute force, impetus and vulnerability, as the song's theme demands in the midst of an emotional stream of acceptance and resignation.
"As the name of the single suggests, 'Defeating Gravity' is about wanting to defeat something that seems invincible," comments singer Maria on the song.
"So often life takes you to the edge of the abyss, but you try never to fall. Too often, in your stubbornness and ignorance, you forget that you are only human. 'Defeating Gravity' focuses on accepting your own limitations and weaknesses after you've pushed them aside for too long."

For the music video, Future Palace worked with Peter Leukhardt for the first time, who has already shot clips for Annisokay, Beyond The Black and Rising Insane, among others. For the visual implementation of their new single, the band went into a hall in their rehearsal house and made singer Maria levitate over a truss, analogous to the song title - sometimes it's good to be above things. 'Defeating Gravity' is part of the sophomore Future Palace album »Run« which will be released on June 10, 2022.
Singles like the bombastic 'Flames', the rousing 'Paradise' or 'Heads Up' already made it clear that the fight with one's own demons is a basic theme of the entire work.


»Run« was produced by Julian Breucker, who already worked with scene heavy weights like Beyond The Black and Annisokay guitarist Christoph Wieczorek who also mixed and mastered the record.
The album talks about the aftermath of a toxic relationship and shows in a visually stunning and vulnerable way that the struggle with one's own salvation is only the beginning, even after escaping from a dramatic situation. The band sets these painful processes to music in dramatic post-hardcore, which is able to atmospherically reproduce the ups and downs of one's own emotions. Brutal like Holding Absence, Spiritbox or While She Sleeps, irresistible and sweeping like Bring Me The Horizon or Pvris – Future Palace sound out all extremes and arrive at a synthesis that is as real as life.

Future Palace are among the most up-and-coming post-hardcore acts in Germany, having been collaborating with Arising Empire since their debut album »Escape«. On Spotify, their songs get a high six-digit number of clicks. In April, the band finally brings their music to the stages when their first own headlining concerts take place, before going on two massive European tours with Annisokay in May and Battle Beast in August and September.