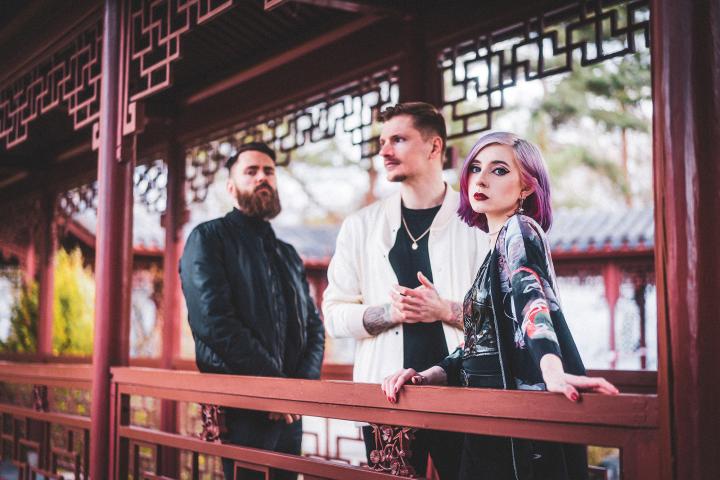 Flames
„I gotta carry on / I've suffered for too long“ is the main credo that the Berlin Post-Hardcore trio Future Palace expresses in its new single in a visually stunning way. 'Flames' is a bitter look into a dark past, which comments on the worst pain of this time with a razor-sharp note shaking off all demons in the epochal chorus. In order to embody this complex network of emotions, the band really pulls out all the stops musically.

The fresh heaviness of sound, which Future Palace had shown on their last singles, gains a whole new dimension in 'Flames'. The most brutal Death and Metalcore elements crash against manic throbbing 808 beats, which sometimes even remind of trap structures. The rambling intro riff could hardly have been written better by After The Burial and the vocal diversity of singer Maria may have reached its peak so far in 'Flames': Great melody, brutal screams, even passages in the style of chanting can be found in the song. Future Palace are making a statement: If you want to process agonizing experiences, you have to go through every emotional dimension.

„Flames is one of our most powerful and aggressive songs. Instrumentally as well as
vocally, we have tried out a multitude of new stylistic means here. In terms of content,
the song looks back on my unfortunately often painful past. Like its predecessors,
however, it conveys the will to fight and hope.“ - Maria

At least as impressive is the music video for 'Flames', which the band shot again with Pavel Trebukhin, who has already directed bands like Imminence or Novelists FR. Even the clips for 'Paradise' and 'Heads Up' didn't skimp on their imagery, but the new video is perhaps the most elaborate visualization that Future Palace have ever chosen for a song. Symbolizing an escapist message that 'Flames' carries in every pore, it is represented by literal fire from which singer Maria escapes. With this, the band gets to the heart of the general narrative of their second album »Run«, which will be released on June 10, 2022 and deals intensively with letting go of stressful experiences.


»Run« was produced by Julian Breucker, who already worked with scene heavy weights like Beyond The Black and Annisokay guitarist Christoph Wieczorek who also mixed and mastered the record.
The album talks about the aftermath of a toxic relationship and shows in a visually stunning and vulnerable way that the struggle with one's own salvation is only the beginning, even after escaping from a dramatic situation. The band sets these painful processes to music in dramatic post-hardcore, which is able to atmospherically reproduce the ups and downs of one's own emotions. Brutal like Holding Absence, Spiritbox or While She Sleeps, irresistible and sweeping like Bring Me The Horizon or Pvris – Future Palace sound out all extremes and arrive at a synthesis that is as real as life.

Future Palace are among the most up-and-coming Post-Hardcore acts in Germany, having been collaborating with Arising Empire since their debut album »Escape«. On Spotify, their songs get a high six-digit number of clicks.
In April, the band can finally bring their music to the stages when their first own German headline tour finally starts. Tickets for the »Take Me To Paradise 2022« tour are available now.