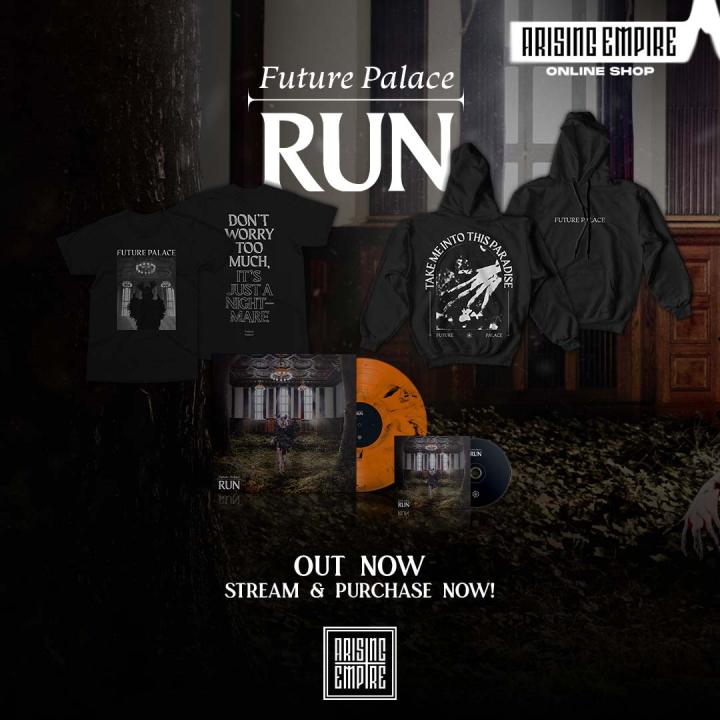 RUN
On the release day of their second album »Run«, the Berlin post-hardcore trio Future Palace release the music video for their single 'Dead Inside' at the same time, once again confirming why they are one of the most exciting and hopeful acts on the current alternative music scene. On the new single, the band once again underscores the emotional power in their music and »Run« as an album in particular.

Watch 'Dead Inside' now: https://youtu.be/q8Kt-n91QDI
Stream and get »Run« as CD, limited colored vinyl and bundle
at the Arising Empire Shop & Impericon
https://futurepalace.lnk.to/run

The song is about the aftershocks of a toxic relationship that not only left its mark in the past, but also long afterward raises the question of how to deal with it. "At the beginning of Dead Inside there was the personal experience that there are people who justify their behavior by saying that they are irrevocably emotionally cold," says guitarist Manuel about the song. "The track deals with such a sometimes tragic situation both lyrically and instrumentally - it reflects inner turmoil, helplessness and anger at the same time."

'Dead Inside' is just one example of how much the songs from the album »Run« thirst to be brought to the stage. "This is certain, the new songs not only sound different, they also came from different feelings," Manuel comments on the songwriting process. "We are therefore particularly looking forward to the live shows - because capturing these feelings in music is one thing, being able to share and express them directly is another." After all, Future Palace's music has never been as multifaceted as on this album: For the first time, the band exercises the hard side of their music to the point of brutal screaming, massive hardcore elements meet intoxicating melodies and a gigantic staging. This is music that wants to be heard and felt - always and everywhere.

For the music video, Future Palace worked with Peter Leukhardt, who has already shot clips for Annisokay, Beyond The Black and Rising Insane.

»Run« was produced by Julian Breucker, who already worked with scene heavy weights like Beyond The Black and Annisokay guitarist Christoph Wieczorek who also mixed and mastered the record.
The album talks about the aftermath of a toxic relationship and shows in a visually stunning and vulnerable way that the struggle with one's own salvation is only the beginning, even after escaping from a dramatic situation. The band sets these painful processes to music in dramatic post-hardcore, which is able to atmospherically reproduce the ups and downs of one's own emotions. Brutal like Holding Absence, Spiritbox or While She Sleeps, irresistible and sweeping like Bring Me The Horizon or Pvris – Future Palace sound out all extremes and arrive at a synthesis that is as real as life.

After two years without playing shows, the »Take Me To Paradise 2022« concerts were the trio's first headline tour, which not only had a very special meaning because of the long quiet time before. The headline tour was followed by the European tour as a special guest for Annisokay.

Future Palace are among the most up-and-coming post-hardcore acts from Germany, having been collaborating with Arising Empire since their debut album »Escape«. On Spotify, their songs get a high six-digit number of clicks. After appearances at Full Force Festival, Swedish High 5ive Summerfest and the massive homecoming show of Annisokay, Future Palace will continue touring as a special guest for Battle Beast on their European Tour in August and September.