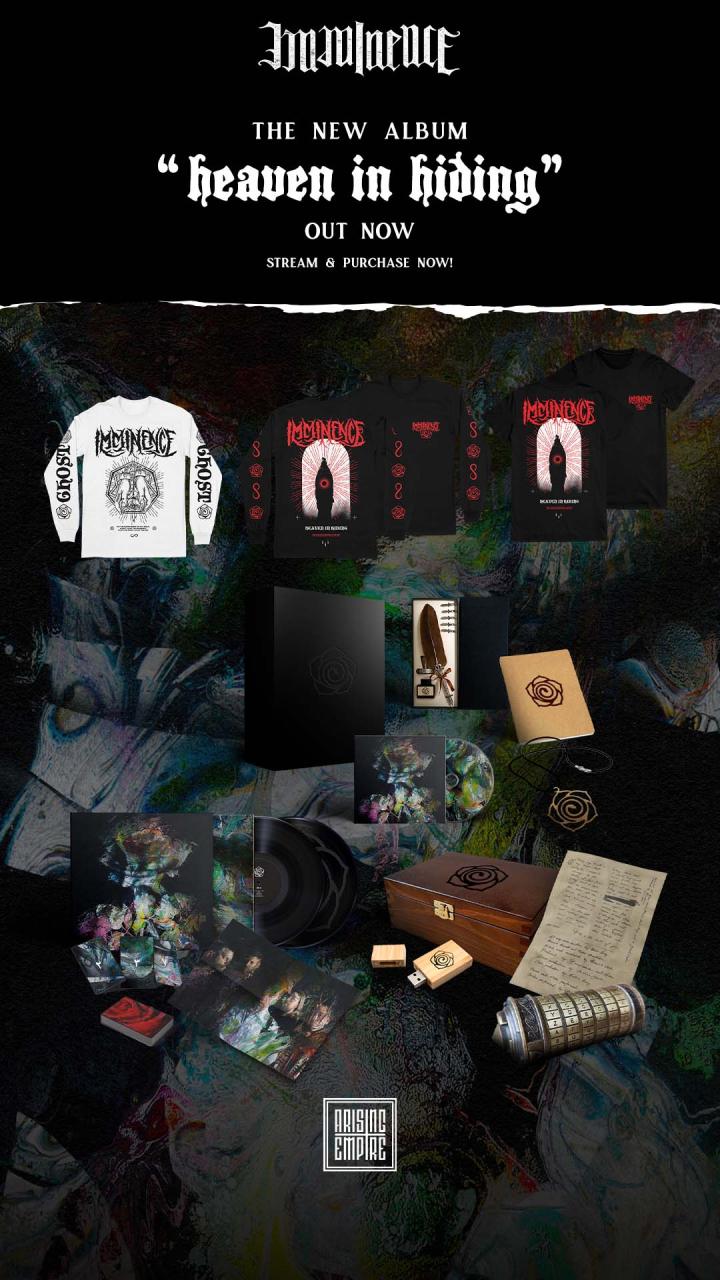 “Heaven In Hiding is definitely worth it”
METAL HAMMER

“…the Swedes are to be placed right next to ARCHITECTS and BRING ME THE HORIZON.”
FUZE

„Heaviness in its most beautiful form.“
MORECORE

"Heaven in Hiding manifests emotions in sound and words. Thrilling to the very end."
ORKUS

»Heaven In Hiding« is an outstanding collection of songs written with an unhindered manifestation of emotional
outburst and sincerity. With an organic approach and honest creativeness, the group delivers an album where each song stands out in character and story telling, whilst still connected in a larger concept. The new record undoubtedly displays a musical and visual persona that instantly challenges the idea of how a modern metal act is perceived today, and acknowledges IMMINENCE as ready to take the place as one of the genres front line artists.

»Heaven In Hiding« presents all the strengths and unique features that IMMINENCE holds. Their unrestrained diversity and dynamic approach proves the band to be unlike anyone else, swiftly and gently crossing through genres and creating a universe that can only be recognized as their very own.

Following the success of recent singles 'Temptation', 'Heaven In Hiding', 'Ghost', 'Chasing Shadows' & 'Alleviate', IMMINENCE has not only raised the bar of what’s expected from an uprising modern metal band in terms of production value and cinematic vision, but also gained recognition as some of the most successful metalcore releases in 2021. Together with director Pavel Trebukhin from TRE Films, the band has worked relentlessly on developing their unique visual universe with an incomparable richness in details and grandiosity, in order to make justice for the songs presented on the new 13 track album, »Heaven In Hiding«.

The new album was recorded, mixed, and mastered in Sweden by Henrik Udd: Award-winning producer that has worked on some of the most critically acclaimed albums with acts such as ARCHITECTS, BRING ME THE HORIZON, AT THE GATES, and many more, including IMMINENCE as well.

With a placing in the Top 100 Official German Album charts, a sold-out run of album release shows and a 100% increase in ticket sales, and doubled venue capacities during the last EU headline tour, IMMINENCE has proven to be one of the most growing and exciting bands in the metal scene today.