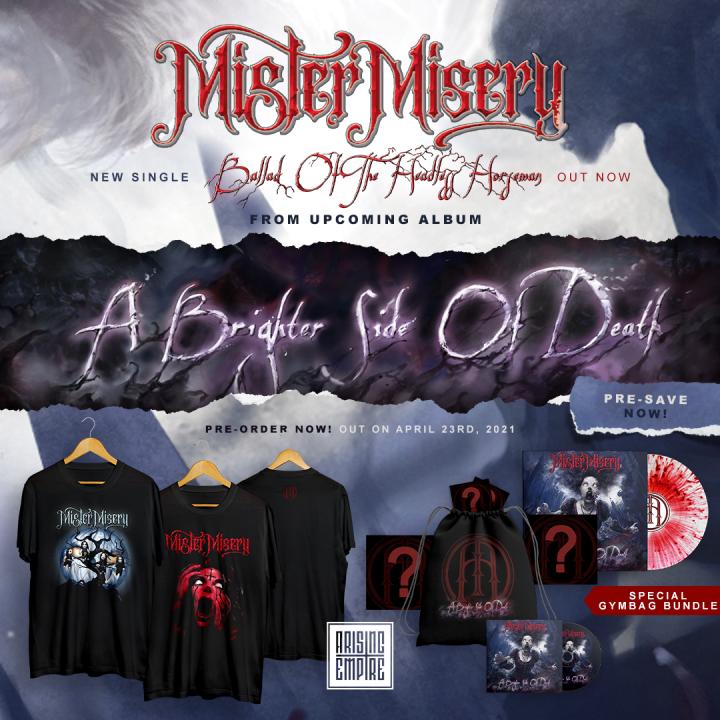 After the pace-setting release of their praised debut album »Unalive« in 2019, modern horror metal band MISTER MISERY, spawned from the hollowed parts of Sweden (2018) has not slowed down, despite the fact a global pandemic crushed schedules, MISTER MISERY kept busy during quarantine, writing new breathtaking material, while still releasing numerous compilations for their fans in the meantime.

Today, MISTER MISERY just launched the pre-orders for their second full length album »A Brighter Side Of Death«, set to be released on April 23rd 2021 via Arising Empire.

“We feel super excited to finally release the pre-order for our brand new second album “A brighter side of death”
It’s been one hell of a ride to say the least, and we have pushed our musical abilities to the maximum on this one!
We look very bright on the future for this band and we have never looked more forward to stepping onto a stage again in 2021!”

MISTER MISERY also released the first single of the album: 'Ballad Of The Headless Horseman' combined with a mind-blowing music video. The single marks a milestone for the band and opens up the next chapter of their horror story! Stronger, scarier and more diverse than ever.

“Ballad of the headless horseman was absolutely the peak of making this album for me. I was in a great state of mind writing this song and it took me back to the first album Unalive where every riff, every melody and lyric came together in one night. Those usually turn out to be the best songs.” - Harley

“I remember when Harley sent me the first version of Ballad Of The Headless Horseman, and I was immediately blown away! Just as with “‘My Ghost’, Harley had just created something huge out of nowhere. It was perfect and I knew the rest of the album was gonna be more massive than we’ve ever sounded before!” - Alex

»A Brighter Side Of Death« will be available as CD, a limited special colored vinyl and a special surprise bundle including CD and other rare items getting revealed as the release approaches.

The band will march through Europe on their 2nd headline tour soon, while booking more shows for the year with the ambition that the world will be back on its feet and ready to go wild again!

»Unalive« was the birth.
»A Brighter Side Of Death« is the rise of MISTER MISERY!