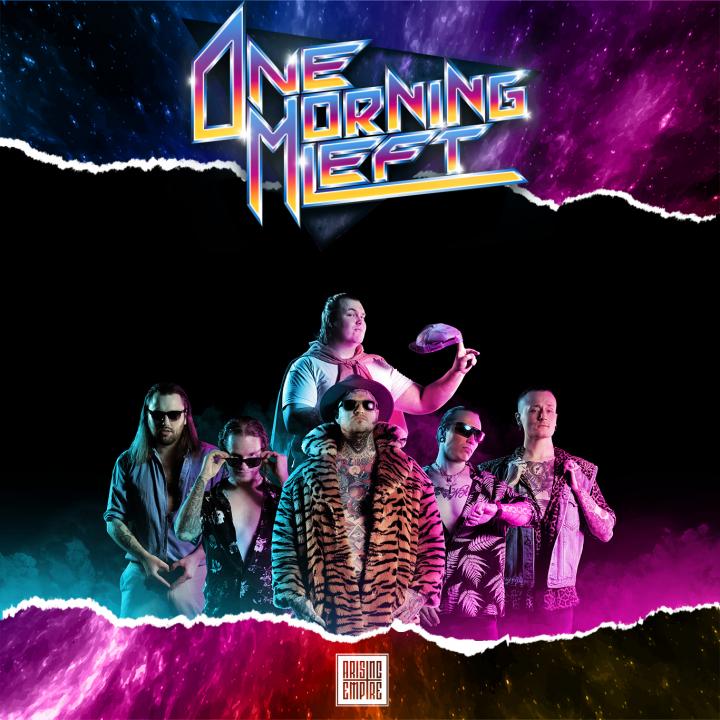 Arising Empire welcomes ONE MORNING LEFT to the family!

Founded in 2008 in Vaasa, Finland, ONE MORNING LEFT is well known for their unique blend of electro, hardcore and metalcore influences as well as their entertaining and energetic live shows where absolutely anything can happen.
ONE MORNING LEFT has gathered extensive live performance experience playing countless shows in Finland, touring mainland Europe, Russia, and the Baltics, and even performed in as faraway places as Iceland and Japan (with packed venues to boot), both as a supporting act and as a headliner. ONE MORNING LEFT has played shows with bands like AMARANTHE, MACHINAE SUPREMACY, ADEPT, PROTEST THE HERO, FEAR OF DOMINATION, TURMION KÄTILÖT and WE BUTTER THE BREAD WITH BUTTER. The band has also graced the Finnish festival season, playing renowned festivals like Tuska Open Air and Rockfest.

ONE MORNING LEFT's debut album »The Bree-Teenz« in 2011. The album reached #30 on Finland's official album charts, followed by the sophomore album »Our Sceneration« at #45 in 2013.

ONE MORNING LEFT is currently putting the finishing touches on their 4th full length album with additional firepower from seasoned players Tuukka Ojansivu on guitar and Miska Sipiläinen on bass guitar, as well as the return-to-form of keyboard player Touko Keippilä from the band’s original »Panda <3 Penguin« line-up. The album is shaping up to be the artistic peak of the band's musical "blood mountain" and everything the band has wanted all along: epic lyrics carried by soaring vocal melodies and harmonies with gritty, aggressive and distinctive dirty vocals from front man Mika Lahti, along with breathtaking keyboard leads, blisteringly fast guitars, masterful bass riffs and feverish drum parts.

"Join us on our quest to make the world a bit more epic!"