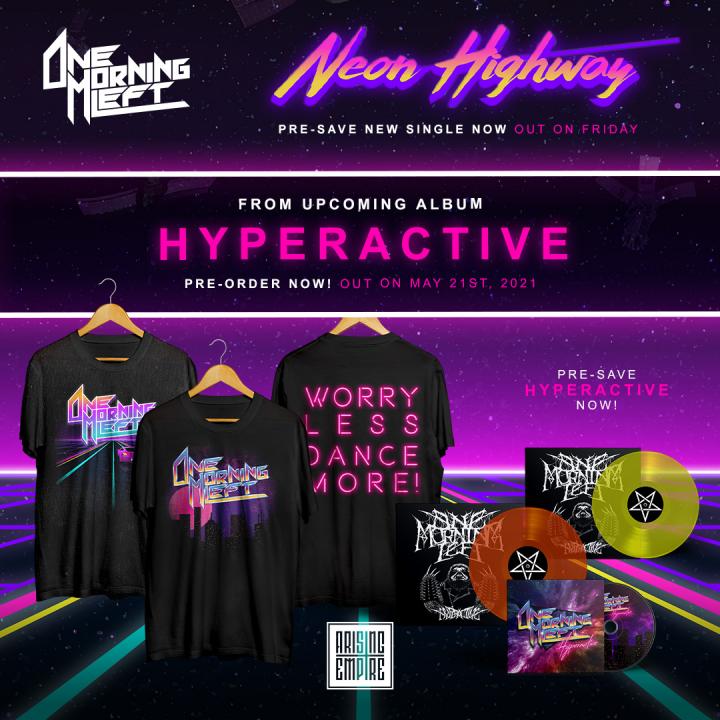 Finnish metalcore act ONE MORNING LEFT is finally back with a retro vengeance!
Today, the band officially launched the pre-orders for their brand-new album »Hyperactive«, which will be available on 21st of May in 2021, via Arising Empire.

ONE MORNING LEFT start right off on top with their new single ‘Neon Highway’, the first taste of this hell of an album..
'Neon Highway' is a hyperactive love song full of pure chaos and fury, thoroughly resonating with the album title. As told by Leevi Luoto (guitar/vocals): “This is a straight up love song. MAD love. Also functions as the landscape-painter of the album, describing the world we’re singing about.”

ONE MORNING LEFT’s fourth album marks their first new material in five years. On »Hyperactive« the group begins a whole new chapter in their story, drawing inspiration from retro electronic- and video game music, as well as 80’s hard rock, while staying true to their heavier roots.

Changes are happening not only in the musical style, but also in their lineup. Returning from the cast of 2016’s “Metalcore Superstars” are frontman Mika Lahti, singer-guitarist Leevi Luoto and drummer Niko Hyttinen. Additional firepower is provided by new faces Tuukka Ojansivu on guitar and Miska Sipiläinen on bass guitar, as well as the return-to-form of keyboard player Touko Keippilä from the band’s original “Panda <3 Penguin” lineup.

With the release of »Hyperactive«, ONE MORNING LEFT looks to add to their growing global fan base. Having gathered extensive live performance experience playing countless shows in Finland, touring mainland Europe, Russia, and the Baltics, and even performing in places such as Iceland and Japan, the group is planning on taking their entertaining and energetic live show on the road in the near future.

"Join us on our quest to make the world a bit more epic!"

Founded in 2008 in Vaasa, Finland, ONE MORNING LEFT is well known for their unique blend of electro, hardcore and metalcore influences as well as their entertaining and energetic live shows where absolutely anything can happen.
ONE MORNING LEFT has played shows with bands like AMARANTHE, MACHINAE SUPREMACY, ADEPT, PROTEST THE HERO, FEAR OF DOMINATION, TURMION KÄTILÖT and WE BUTTER THE BREAD WITH BUTTER. The band has also graced the Finnish festival season, playing renowned festivals like Tuska Open Air and Rockfest.

ONE MORNING LEFT's debut album »The Bree-Teenz« in 2011. The album reached #30 on Finland's official album charts, followed by the sophomore album »Our Sceneration« at #45 in 2013.