Resolve released their debut album "Between Me and The Machine" 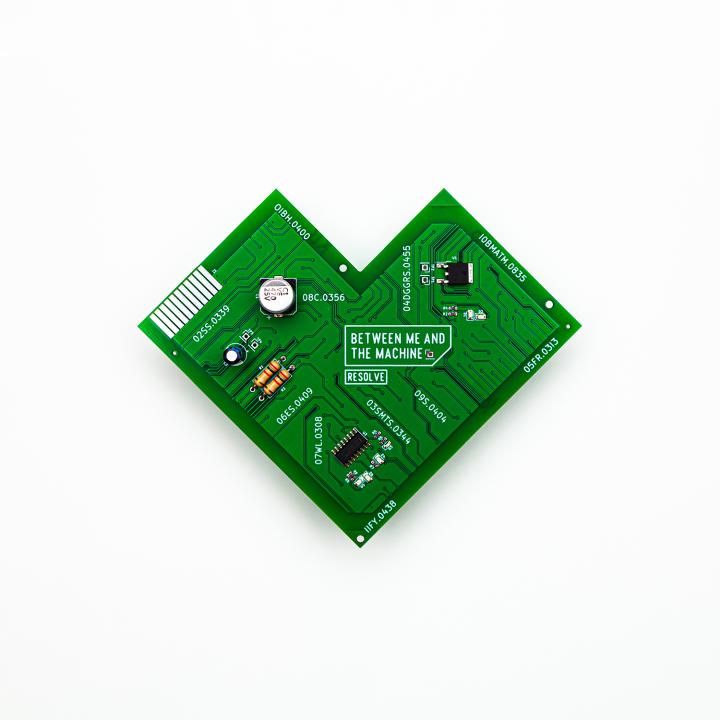 "Beautiful Hell" and "D.G.G.R.S", offering skilled riffing and reminiscences of early PARKWAY DRIVE, while songs like "With Love" form the multifaceted antithesis and dive into the atmospheric depths of bands like SLEEP TOKEN.
FUZE

“The band RESOLVE have united all three elements and have made probably one of the best records I have heard in 2021.” Uncivil Revolt

“Between Me And The Machine is a beautiful debut masterpiece from a band who have played it right.”
Distorted Sound


RESOLVE on their debut

RESOLVE have released their highly anticipated debut album »Between Me and The Machine«, out now worldwide on all streaming platforms via Arising Empire. To celebrate this phenomenal debut the band shared the music video for 'Forever Yours'.

Watch now / listen to 'Forever Yours'

Stream, purchase
»Between Me and The Machine«
as CD, limited vinyl and special bundles

"It’s hard to put into words what this record means to us. We’ve been working on it and doubting ourselves for what feels like an eternity now, but to see it finally see the light of day is so much more thrilling than it is scary. We can only hope people will take the time to listen to it from start to end with as much attention as possible, and perceive just a bit of the blood, sweat, tears and love that went into it. We also want to say the biggest thank you to the people who support us, preordered the album or just spread the word, and to our amazing team for all their work over the last year, together we are Resolve. "
- Anthony Diliberto (vocals)

Made in the surroundings of RESOLVE HQ, a studio, rehearsal space and sanctuary built from the ground by the Mariat brothers, and crafted through the uncertainty and radical societal changes that came with the COVID-19 pandemic, the trio set about forging »Between Me and The Machine«, a record that perfectly encapsulates the chaos and callousness of the world we’re living in through RESOLVE's ambitious lens.

Recorded and mixed by Robin, the record is a richly textured and gutturally poignant collection of tracks that bat between white-hot riffs and shimmering ambience with the flick of the wrist.
From the gorgeously pummelling storytelling of ‘Emerald Skies’ and the melodic genius of ‘Seasick Sailor’ all the way through to the textured grit of ‘Cycles’ and haunting atmospheres of ‘Sing Me To Sleep’, it is as varied as it is visceral, showing off the bands attention to detail as much as their ear for an addictive chorus.

Though dig a little deeper, you'll find that the band delve even deeper into the emotional side of the times we live in. It’s an adventure, told through the eyes of a space explorer searching for a new world to inhabit after being overwhelmed by the level of technological advancement on his own planet and internal struggles he experiences along the way, into the deepest corners of the heart and soul, a search for tranquillity in a world controlled via buttons and wires. It’s about the balance between the self-doubt that we’re losing who we are as a society and the fear of what we would be without the means to live our lives as they are right now. More than anything, it’s about humanity, connection and community, three things that have inspired the band from the very beginning.

“It’s about finding your own place within a world that is becoming more and more dominated by machines,” Robin states. “We are part of the last generation that grew up without the Internet. Even though it feels natural to us, it’s also easy to still feel a little bit lost.”

When looking out for each other and soul searching feels more crucial than ever before, RESOLVE have put together a record that transcends borders altogether. They've created a universe littered with as much darkness as light and as much hardship as hope.
»Between Me and The Machine« feels like just the beginning of a truly spectacular voyage to the stratosphere, but right now, it is the sound of a band making the most brutally honest and beautifully human music they can.

RESOLVE will support LANDMVRKS on their EU/UK tour 2022, together with TEN56. and GLASSBONE.