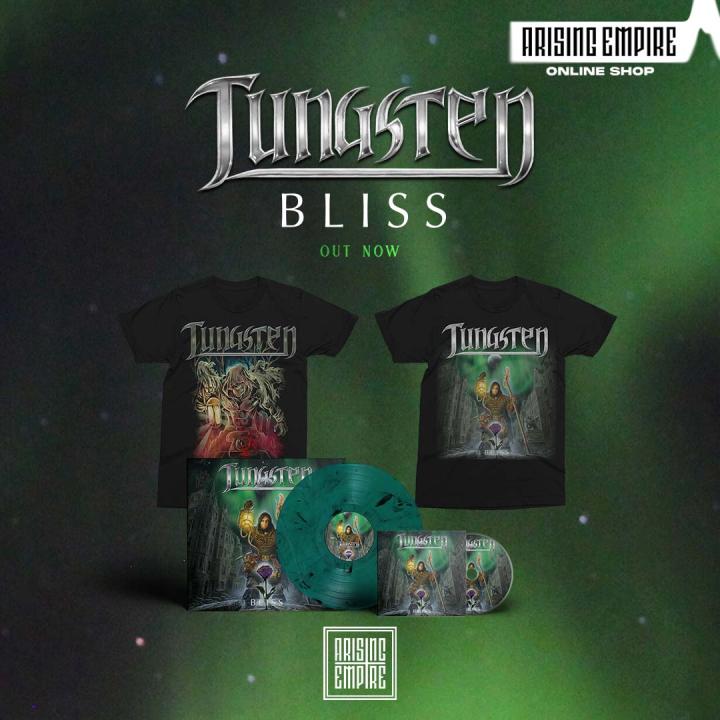 “Out of darkness comes Bliss!”
Swedish metallers Tungsten are back to conquer the world with their third studio album entitled »Bliss«, out now worldwide!

»Bliss« is undoubtley the heaviest and darkest album to date by Tungsten. The typical ingredients that define the music of Tungsten are still there while new grounds and territories are being explored musically. The hooklines are stronger and more dynamic than on the previous albums. The lyrics are darker but they still focus on things common man might relate to in one way or another.
Mike Andersson (vocals) says; „It all came naturally. Creating and recording this album truly put us in a feel of bliss. Nick & Karl who wrote the music have really showed their skills and musical talents on Bliss with new musical ideas but still based in the genre that we established in the band in from the beginning."

Watch the music video for 'Northern Lights' now
Stream and get »Bliss« as CD, limitied colored vinyl and bundle
at the Arising Empire Shop or Impericon!
https://tungsten.lnk.to/bliss

»Bliss« was recorded at Harm Studios, Trelleborg (Sweden). Nick Johansson once again took care of the mixing, mastering and production duties.
Karl Johansson says: „We really hope that Bliss will reach out to an even broader fanbase than before. So much pain, sweat and love have been put into this album. We are truly excited to introduce Bliss to the world“.
Anders Johansson agrees; „Yes, this album might be one of the hardest for me to record. Nick is close to a perfectionist at the production helm so if I can find something that has been good about the pandemic it might be the fact I could spend so many more hours in the drum studio just to practise and develop my technique“.

Andreas Marschall was once again hired to paint the front cover. The conceptual idea was a collaboration between the band and Andreas and it conveys a darker feeling which suits the music perfectly. Volfram is back in a twilight world to ours on his neverending quest to aid the weak.

Tungsten is ready to enter the live scene and is already confirmed for Sabaton Open Air in August, 2022.